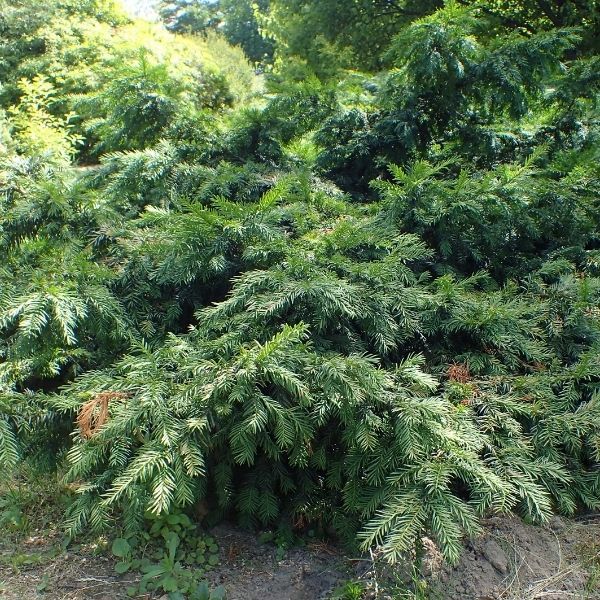 This evergreen shrub features soft, sickle-shaped needles and an undulating and rippling form. The new growth lifts upwards and the old growth nods down. The double rank and file needles and dense growth make this a fantastic low hedge or border plant.

Coral-red seed-bearing cones accentuate this shrub if a male is nearby to pollinate it.

How to Use Spreading English Yew In The Landscape

The shaggy appearance of Spreading English Yew is perfect informal backdrops to Perennial and Cottage garden beds, along Foundations, or facer plantings for immense curb appeal!

Great atop Walls and Rock Gardens where these wide-spreading branches can tumble and spill over the rocks. Yew are verdant border and perimeter plants, defining and accenting garden beds.

The unique branching takes the spotlight as a specimen or focal point, especially when highlighted on a berm or raised bed. Plus Yew are inspiring among Asian-inspired and Zen gardens.

Use atop that difficult to mow slope for erosion control, while lending a steady evergreen presence.

Tolerant of urban conditions and pollution, Spreading English Yew works along the road or driveway, even atop Roof gardens and Balconies.

Hardy in zones 5-7, Spreading English Yew adapts to a wide range of sun. Tolerant of full sun, especially in cooler growing zones, and full shade in the warmest zones, and everything in between.

Any moist, well-drained soil is fine, but they can't tolerate soggy soil. However, a thick layer of mulch over the root system insulates and holds more moisture throughout the year.

Please note the red berries of Taxus can be toxic, so be careful not to ingest them.

Year-round curiosity and evergreen presence on a fantastic, Garden of Merit Award-winning shrub, you won't go wrong with a few Spreading English Yew in the landscape! Order yours from Nature Hills today!