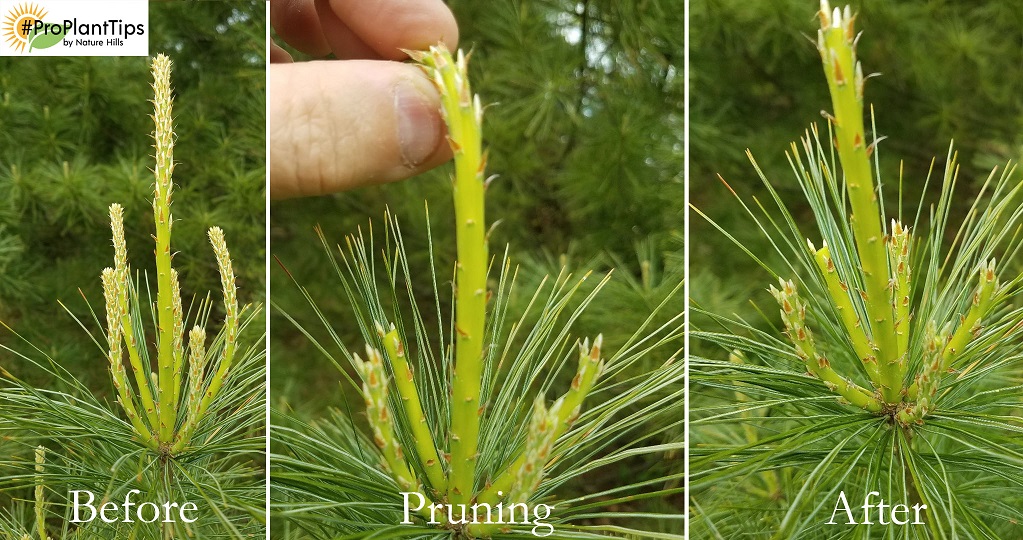 You would think you might need a pruning shears to prune your pine trees…but not the case at all.

When the new growth elongates like it does at this time of the year on Pine Trees, it looks like “candles” stuck on the tips of each branch.  Usually there is one center longer candle in the center surrounded with several shorter candles.

The best time to prune all pine trees is when the new candle growth expands and before any needles have started to from on those candles – typically 6” or so.  That new growth is tender and very easily shortened up by breaking that new growth back by about half way with your fingers leaving the longer candle the longest on the tip of each branch, including the very top of the tree.

Do not cut the new growth with pruning shears as you will also cut the newly emerging needles, but if you BREAK back the new candle growth the needles will not be harmed at all and each tip will make a new bud on the tip for next year.  The needles that emerge from the candle that was broken back will be perfectly formed as they emerge and develop.

Why shorten up that new growth?  By “candle pruning” as it is called, you reduce the amount of growth that will expand after breaking them back by about half.  Instead of the new growth being two feet or even more, it will only be about a foot reducing the distance between the next set of branches.  This reduction of new growth will affect the overall form of the pine while keeping a very natural appearance.

Candle prune your pine trees when they are young so that they will already have a dense and uniform outline.  It works with all pines including dwarf and Mugo.