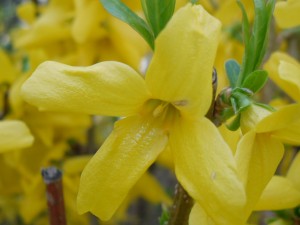 Pruning forsythia after flowering is the most widely used method. Cut out about one-third of the old woody growth.  This encourages new young growth, which will supply the next season's flowers. Experts advise that you should be looking for new growth that develops quickly in whip-like form.  If the whip like branches are not trimmed or trained it will ruin the shape of your plant and will result in reduced flowering. So, if any whip-like growth develops, pinch or prune out the tip growth when it is about 15 to 18 inches high. The tip pruning will result in several new growths developing at that point and the plant will become bushier and more prolific in its flowering.

Please note that an annual forsythia pruning is by no means mandatory. If the form of the forsythia bush is good, you can go several years between prunings. Pruning forsythia when it is easiest to tell the newest branches apart from the older is advised.  Only the older branches will have blooms; the first-year branches won't have any yet, so you have a graphic reminder to avoid them.