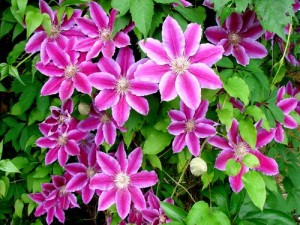 Clematis Plant pruning is the most important factor when considering how and when a clematis will bloom. Pruning clematis improperly will never kill the plant, however it will likely delay the bloom. Not pruning the plant at all will allow the plant to bloom, but proper pruning will cause more and longer blooms. All clematis should be cut back the first early spring after planting. After this, the time and amount of pruning depends on the type of clematis being grown.

Pruning clematis that flower only on the previous year's growth should consist primarily of waiting until blooming is finished in May or June.  At this time, any weak or dead stems should be cut out.  When pruning clematis of this type later than June or pruning too much, will severely limit the amount of blooming in the following year. Clematis pruning of the second group, consisting of varieties that bloom on hardened wood from the previous season and varieties that bloom on both current and previous year's growth, begins in early spring with a light pruning.  When pruning, variations in stem length will produce a better-balanced plant.  Any weak or dead wood should be removed at this time as well. Pruning clematis that bloom only on the current years growth involves the plant being cut back in late February to two strong sets of buds close to the ground on each stem.  This will result in plants that begin a bloom near the base, and have flowers sporadically up the height of the entire plant.