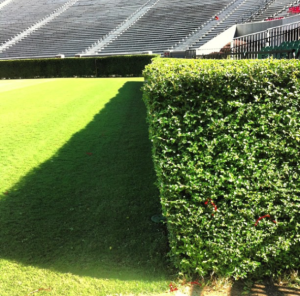 When someone thinks of Privet hedges, one of the first things that come to mind is the University of Georgia's "Between the Hedges" in Sanford Stadium.  So what better source to learn how to care for Privet than the world experts?  We interviewed UGA's very own Kellie Baxter, who is in charge of caring for the Privet hedges in the stadium. First, a little background from Kellie about the hedges themselves.  In 1929, after the completion of our new stadium, it was decided that hedges would make the field look nice. After deciding that roses would not do well, Privet was agreed upon. Ever since that day our Privet hedges have been the stuff of legends. We here at Georgia consider them quite holy and the games that go on between these hedges even more so. 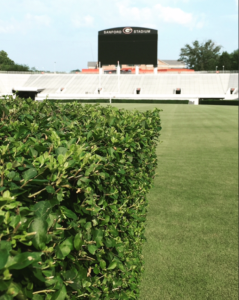 Here in the South a Privet hedge (or Ligustrum sinense in this specific example) takes a lot of maintenance. During the summer they are trimmed once a week to keep them in shape. With the temperatures here being in the high 90s in the summer and with a sand based field, we water often. That can cause problems without the proper precautions. We put organic matter in the hedges to help with water retention and must fertilize often. We use Harrells Polyon Coated Fertilizer for landscape plants which works well for us. It is a slow release fertilizer that is not activated by water but by heat. We leach out a normal fertilizer very quickly with our heavy watering, but with this releasing in the heat when the plant is growing and needs it most that is not as much of a problem. We help them along twice a year with an organic fertilizer to help build up the soil and the root growth. Our growing season starts really taking off in May. In June, after we have gotten the hedges the height that we want, we will use some growth regulator on them to not only slow them down a little but to make sure they are filling out and getting full. 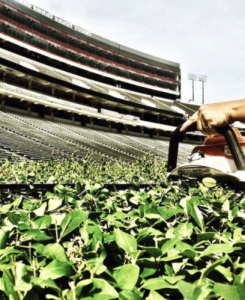 We don't usually have many pest problems. We spray once a year for white fly control. Keep in mind that whatever is used on our turf also affects our hedges and vice versa. We really try to use as little chemicals on them as we can to insure that the athletes are safe when the accidental ball or player ends up in our hedges! We use a long gas powered hedge trimmer to trim the hedges and have found that is very important to keep them as sharp as possible to avoid tearing the plants. We have occasionally hand pruned them back to about 12 inches in the early spring to encourage new growth and keep them healthy. (I don't do that often. It is a JOB!) Overall, caring for Privet is easy. It is a plant that will grow to hedge size quickly and doesn't have many health issues. It does require frequent pruning but you will be rewarded by a beautiful hedge! 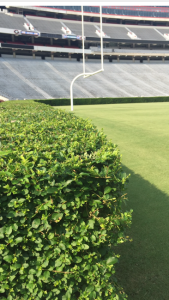 To give you some perspective, our hedges are about 5 feet tall and 4 feet wide. We do have a fence hidden in between, which has stopped even the most zealous of fans that are intent on rushing the field! We have had players on opposing teams tear out, urinate on and otherwise try to destroy the hedge! They have not been successful! Our own players have landed in or on the hedges and except for a few holes, they thrive. They have been moved twice. They were moved for the 1996 Atlanta olympics when soccer was played on our field and two  years ago parts were removed for a Jason Aldean concert. Both times the plants survived and never missed a Bulldog season! Over the years, there have been many different people that were caretakers of the hedges. Currently I take care of them and it has been an honor! I have been a dog fan all of my...well, here in the south a lady never tells her age but it has been a long time!