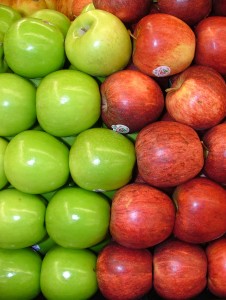 First of all, dwarf apple trees are smaller. This means that they take up less room in a garden. The reduced size of a dwarf apple tree makes it easier to prune, spray and harvest fruit.

Additionally, dwarf apple trees will produce fruit earlier than standard apple trees, often only three years after being planted, as opposed to as many as ten years. There are generally two ways to create a dwarf apple tree. One way is to specially breed them smaller. This is very hard to do and may take hundreds of years. A faster, and much more common way is to graft the tree onto a rootstock that has been selected for its dwarfing characteristics.There are several different types of rootstock, and each works best with specific trees.