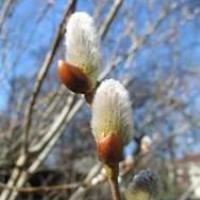 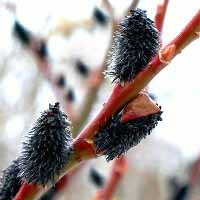 Soon pussy willows, with their soft, touchable gray catkins, will be returning to the grocery stores and florists' shops. In my cold winter climate, those catkins won't show up outside for many, many weeks, but they are growing somewhere and merchandisers will be stocking up shortly to give us all a taste of spring. Whenever I see them, I wish once again for my own pussy willow bush. Having such a plant would not only provide me with armfuls of pussy willows for my own house, but give me the satisfaction of not having to pay for them.

As the name suggests, the giant pussy willow, has large, silvery-pink spring catkins. The black variety features interesting black catkins accented with flashy red anthers. Salix discolor, which is distinguished by its cold tolerance, has lots of silvery catkins as well.

This year I will get a pussy willow, at long last. I have a spot that has the consistently moist soil that members of the willow family require. Once my pussy willow is installed, I will prune it annually after it flowers to curb its vigorous growth habit. I will also surround it with other plants that provide more than one season of interest, as that is not a strong point with the pussy willow. Next year, I will not have to get my pussy willows at the grocery store.